‘[Swimming] helped me to accept myself and I believe it can help other people to accept themselves too,’ says Hungarian world champion

Fanni Illes had never been swimming when her father made a light-hearted prediction that she would qualify for the Paralympic Games four years later. She was 12 years old and had just been given her first swimsuit.

But to his surprise and delight, not only would his daughter compete at Beijing 2008, but, at 16, she would be the youngest athlete to represent Hungary at the Games.

Illes went on to qualify for London 2012 and Rio 2016 and is preparing for her fourth Games in Tokyo in August. On her list of achievements are also world and European Para swimming champion titles.

“What started as my father’s kind joke that I would qualify for Beijing 2008 actually became a reality,” said Illes. “I was so excited to get my first swimsuit and learn to swim, and now, [16 years on], Tokyo 2020 will be my fourth Games and I am anxiously waiting for it.”

As a role model, ambassador, and motivational speaker, Illes knows the positive impact Para sports has had on her and wants to show individuals and families facing similar challenges that there are new ways of living through sport.

Since her Para swimming journey began in 2004, a world of possibilities has opened up to her. Illes was born without legs and has webbed hands and the spine condition scoliosis.

“Swimming means everything to me, “she said. “It helped me to accept myself and I believe it can help other people to accept themselves too. And quite literally, since you have to strip down to your swimsuit.

“It gave me goals to become my own hero, the sportswoman who achieves great things. It also built my self-confidence. People no longer pitied me but started to appreciate me and applaud my success.”

Her proudest moment came when she won gold in the 100m breaststroke SB4 at the London 2019 World Para Swimming Allianz Championships.

“It was an indescribable feeling. I felt all the years of hard work were worth it. I was devastated after London 2012 and contemplated giving up, but the best memory was seven years later winning gold in the same pool.

“My motto is that hard work always pays off and no matter how hard the situation, you can always come out of it a winner.”

Illes became European champion in the same race at Dublin 2018 and is now preparing for the next Europeans in Madeira, Portugal in May. It is the last major event before the Tokyo Paralympics.

The postponement of the Games due to the COVID-19 pandemic meant that the swimmer could go ahead with surgery on her shoulder.

“I saw the postponement as a possibility to train more and to improve. My goal is to be on my best form, to swim my best time and whatever medal I may get will be worth it,” she said.

Illes is hoping for her first Paralympic medal. And after competing at four Paralympics, she also dreams that one day the Games will be held in her own country.

“Para sports are slowly getting known in Hungary but there is still much to do. If the Paralympic Games or World Championships were held here the media would give more attention to Para sports.”

It would also help her to highlight other benefits of sport.

“Swimming keeps me physically and mentally fit, but it has also given me the opportunity to travel, meet new people and experience new things.

“We only have one life, so we have to live it to the maximum, without limitations which sometimes exist only in our minds,” she said. “Set yourself free and try new things.”

Illes grew up in Rezi, a village about 200km from the capital Budapest, with her father Tihamér, mother Erzsébet and younger sister Réka.

She was born with dysmelia, a condition which affected her limbs. Although it came as a shock to her parents, they have always been loving and supportive.

“They are my main source of inspiration,” Illes said. “They continuously encourage me to get better to push the limits to the maximum.”

As a child, Illes learned how to climb stairs and do everyday activities, but she still had to overcome physical challenges. At school she walked with the help of prosthetics but could not wait to get home to “get rid of those legs and join other children to play football and to skateboard”.

She had the support of teachers and pupils, who were able-bodied, and was never made to feel different.

“I had a completely ordinary life growing up,” she said.

When Illes was 12 she became interested in Para swimming after watching a TV programme. Her parents bought her first swimsuit, and she began training twice a week with Réka in a nearby pool.

“From the get-go it was obvious that I had found my natural and happy place in the water where everything is much easier.”

Athlete of the year

Since 2013 she has been coached by Almos Szabó, who also trains other top Hungarian Para swimmers, such as Paralympic medallist Bianka Pap.

“My family and Almos are excited about the Tokyo Games. They are my biggest fans,” said Illes.

On top of her regular training schedule at Budapest’s Duna Arena, the 28-year-old has also been mentoring children through the Golden Butterfly Foundation which her parents set up in 2006 to support her training and buy her swim equipment.

“In the last two years all the donations have been used to support local Para swimmers with their needs. They are around 15-years old and are the shining hope for the future,” Illes explained.

She also wants to be a role model to the girls in her team: “I always try to show a good example.”
Last year, Illes was voted Female Athlete of the Year at the Glamour Women of the Year 2020, a traditional award hosted by the Hungarian edition of the fashion magazine.

Before the lockdown imposed by the pandemic, she had accepted many invitations to speak about her life at events.

“I enjoy inspiring others,” she said. “I believe if there is only one person whose life I can have an impact on, I am happy.” 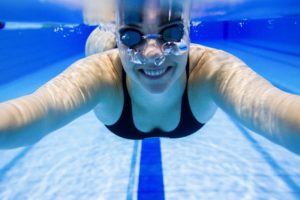